Use the good plates. Uncrate your mother’s silver. Dust off the crystal. What are you saving those candles for? This is your special occasion.

I grew up in a house with an imposing china cabinet that smelled strongly of wood polish and rattled like a Waterford wind chime when you tip-toed past it. When those tall, hand carved doors were open it signaled party time, and my parents took great care in setting a table to welcome guests.

I’m too clumsy for cut-glass crystal and too impatient for the care of precious silver things, but my one indulgence: a good set of plates. I bring them out for everything from pizza to beef tenderloin. Because it’s not about what is served but rather, it’s about the people who traveled across an ocean or strolled a few blocks to spend time and share a meal with us. In fact, all about that.

Food Republic, a food culture destination for men, recently asked me to impart some etiquette and entertaining guidelines for the upcoming holidays. I was referred to as a “lady friend”–a title alone which was was worth the assignment. New moniker aside, I truly had fun dispensing advice on everything from stocking your bar with the right glassware and what to pour in those highball or birdbath glasses.

How to Seat Guests 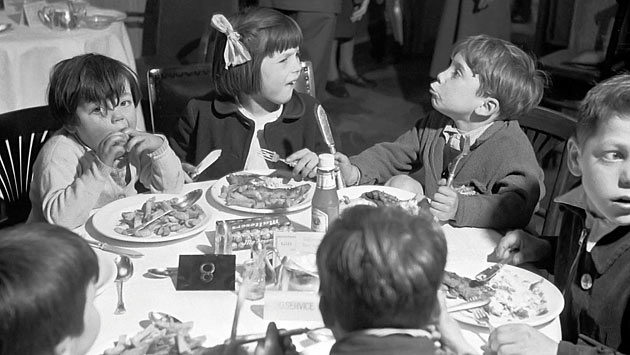 I asked for the post-holiday scoop, and readers dished. Hopefully today’s Q&A will help others avoid seating scenarios gone wrong at their next party. Please send along your solutions too.

Q: At Christmas dinner the hostess (my sister-in-law) requested a favor: that the other single adult guest and I sit at the kid’s table (age range 7-21).  I’m family (the other guest was not) so I obliged, but still felt very put off. Was I wrong to feel slighted?

A: There are several things wrong with this scenario, but your feeling of being snubbed is not one of them. Making people feel welcome is the heart of sharing your table and home. It’s unfortunate that your sister-in-law missed this basic, important detail. Especially since I’m sure she worked hard to shop, cook, clean, etc. for the dinner.

Not only did she assign seats, but rank as well.  Despite the fact that you and the other guest were nearly twice the age of the oldest ‘kid’, those without a plus one were considered lower in the adult table pecking order. That is the more disappointing reveal of your host’s character. We can’t remedy that, but this seating fiasco could easily have been avoided.

*Disrupt the decorative tablescape and squeeze in two more places. It’s possible. This Christmas we had 11 adults at a table that comfortably seats six. It was like one of those annoying story math problems, but I was determined that no one be farmed out to the couch (all of 5 feet away, but still). 10 proper chairs, one shoehorned in stool later and, elbow to elbow, we dined together.

*Forgo the kid vs. adult table and mix up the seating chart. I have a friend who likes to separate couples which is a nice change. But the cross generational set-up is usually a guarantee for interesting turns in conversation. Warning: grandma might get hip to Twitter and start following you.

*Serve buffet style. Set smaller tables and let people land where they will.

*Hosts take the hit. If committed to a sit down deal with a precise number at the table, then the hosts should accommodate their plan by sitting at the kid’s table.