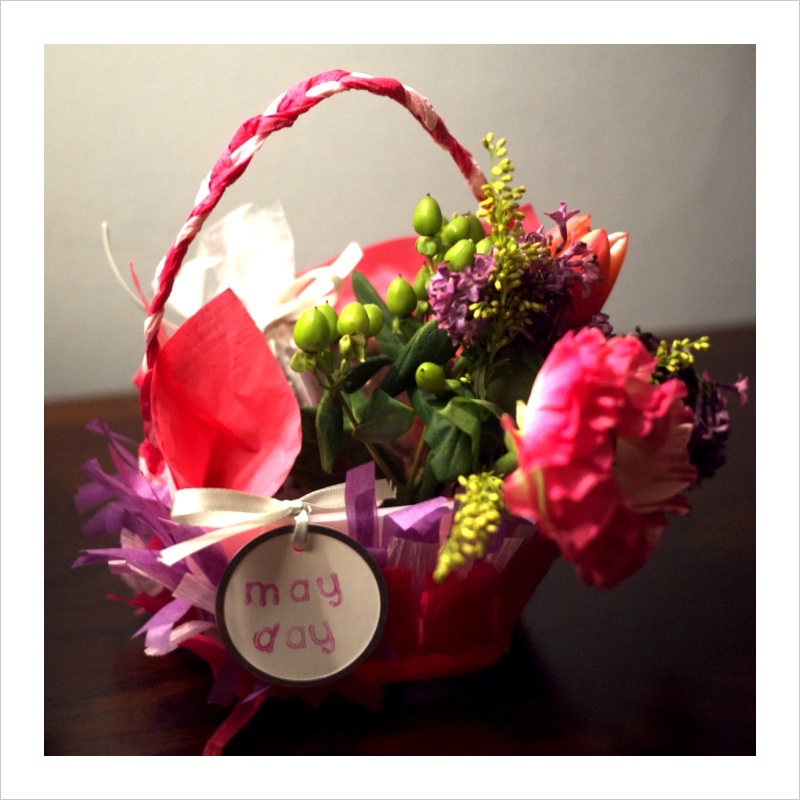 Last year on May 1, a tiny basket festooned with crepe-paper ruffles containing pink tulips, glossy green hypericum berries and homemade sugar cookies was left on our doorstep. I half expected to glimpse woodland elves scampering off down the block trailing pixie dust in their path. I wasn’t too far off on the magic bit, as the source was my friend Jessie, one of the most incessantly creative people I have the good fortune to know.

Jessie and my pal Brian are the husband-wife-team behind, Loeffler Randall, the dream of a footwear company that they spun into a remarkable reality. As dedicated as they are to this successful business started in their then Brooklyn garden apartment, they have another thriving venture: raising three sweet boys (5-year-old twins and a 19-month-old).

While Jessie obviously has an incredible talent for sublime design and high fashion, she  equally adores hands-on crafts that involve paint, glue, stamp sets and her curious boys. The May Day basket is just one example of her many thoughtful, homespun projects.

I asked Jessie to share a little bit about these baskets of bliss in honor of the ancient spring festival of May Day tomorrow.

Until this treat landed on our doorstep, I had no idea about May Day. Is it something you celebrated growing up? Yes, when I was little we used to make May Day baskets for our neighbors, particularly older ladies who lived in the neighborhood. We’d make little bouquets out of the wild flowers we’d find around the neighborhood.

What materials did you use to create last year’s baskets? Plastic tubs I found at the hardware store; streamers (to make the fringe); more streamers to braid for the handle; glue to secure fringe to the baskets; a glue gun to secure the handles; little tags from the hardware store to write “May Day”; rubber stamps to stamp out the letters and ribbon to tie the tags onto the baskets. 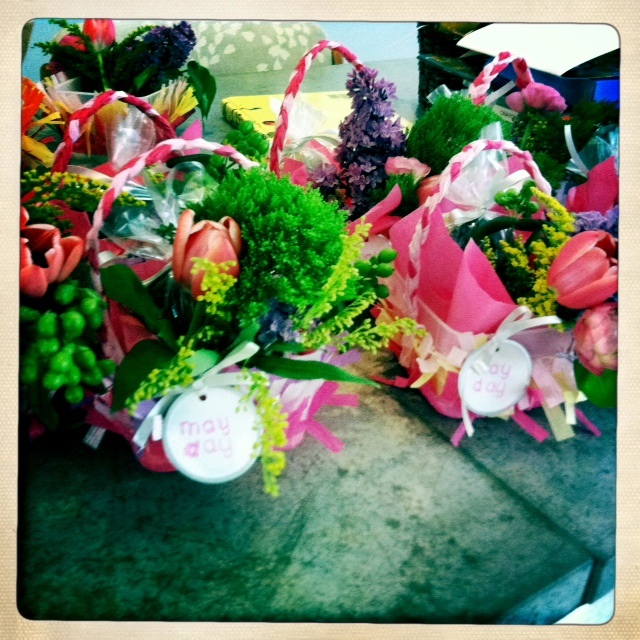 What sort of treasure should fill a May Day basket? Flowers in a little bouquet and something sweet to eat.

How did you get your boys involved with this thoughtful project? The boys helped me glue the fringe to the baskets, select the flowers and make the bouquets. And they were my delivery team!

We sadly missed the best delivery service ever, but  how did people react? People were completely delighted. When I was growing up we did this every year, but these days I don’t think many people do it. So it was a real surprise and it felt like an old fashioned treat.

What did your boys learn from this act of giving? It’s always nice to come up with a project around giving. Sharing and giving is a tough concept for 4-year-olds. Of course, my boys were very vested in making their own baskets, but they were even more thrilled at the reaction the baskets received from others. They loved the project! 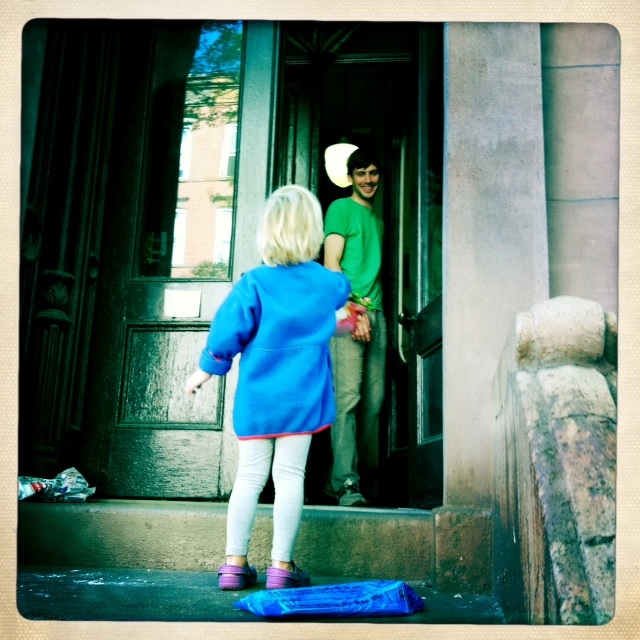 I love this project too. It’s perfect for all ages, and any chance to spread spontaneous, unexpected joy should be taken. Thanks Jessie!

If you are in need of something for the host or hostess with the mostest (really, as in the person who has everything and you’ve run out of ideas) a short, chic or multi-purpose apron might be just the thing. The demure apron may have been made popular by June Cleaver, but with pockets and updated patterns it’s ready for a comeback. Not just all flounce either, a more rugged waist apron is handy for the garden or tool-shed tinkerer. In skulking around the web looking for aprons I discovered that there is even an apron museum in Ioka, Mississippi. Road trip anyone?

I have to give credit for this idea where it is due to Emily, the clever, generous maid-of-honor to my dear friend Sarah. In a nod to the the-bride-to-be, a charming hostess herself, Emily gifted kicky cocktail aprons to guests at Sarah’s bachelorette dinner. Not only is it a sweet reminder of the bride, but it’s so useful too. 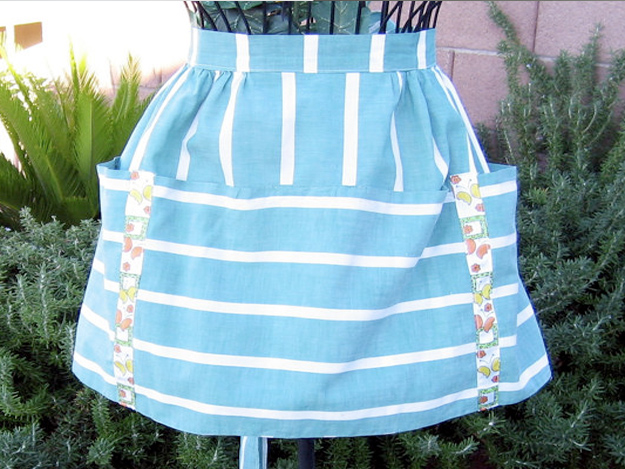 Emily found many of the aprons from Lorraine Mahoney’s vintage collection. This classic gingham number makes me want not not only bake a pie, but even attempt a crust from scratch. 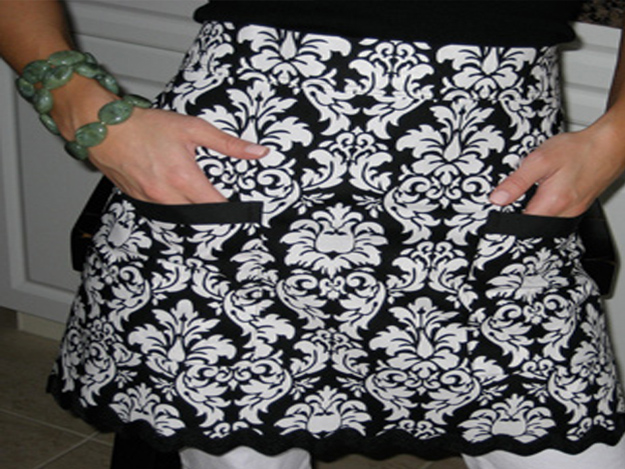 A trim demi style apron with a damask print and roomy pockets from The Hip Hostess qualifies as kitchen evening wear. 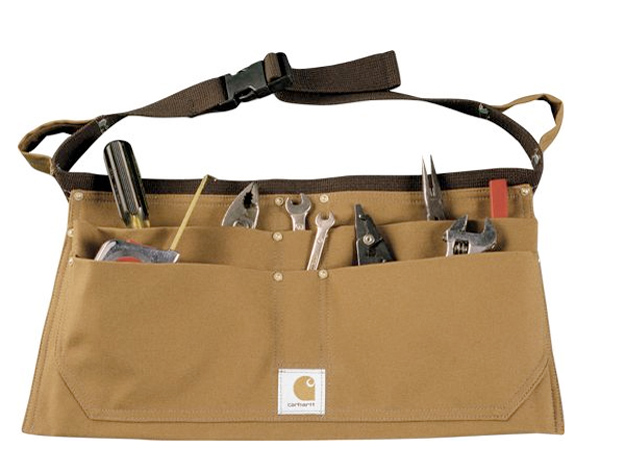 And, for a less frilly host or hostess, this hard-working cotton duck Carhartt apron has pockets for tucking away tools for any trade––from grilling implements to paint brushes. 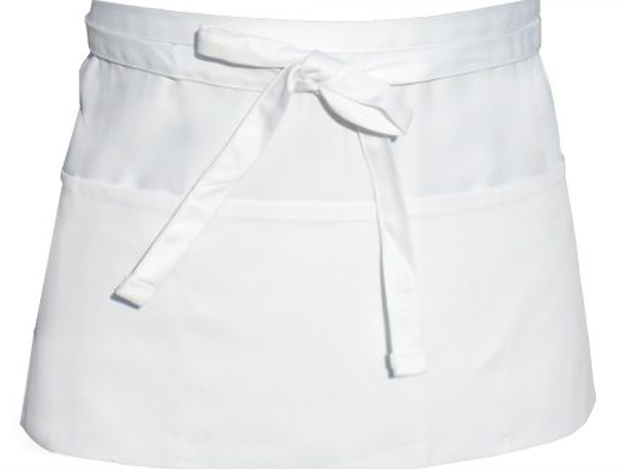 Or, keep it short and simple with a restaurant quality cotton blend bartender style apron from Sur La Table. 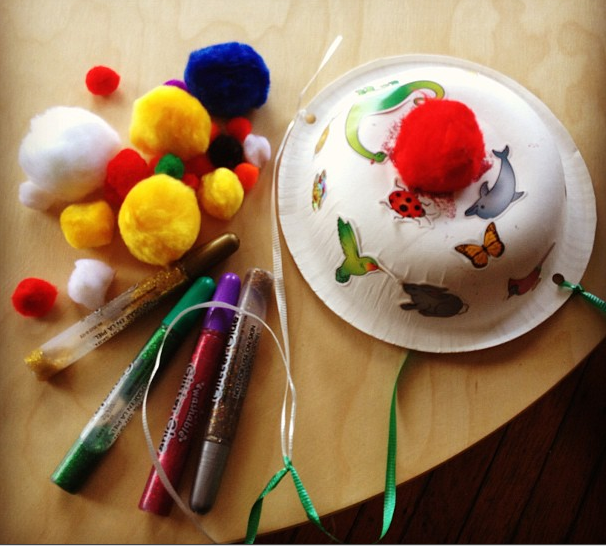 This past weekend concluded a marathon birthday celebration for one of those numbers that kicks-off another decade. And kicks me into a new marketing bracket––bring on the premature AARP mailings. The closing ceremony, as it were, was marked with friends and their children who rolled with my birthday wish to all cram into our one-bedroom apartment for a party.

The day before the little fete I started to panic a bit…what to do with all the kids? As in many hosting situations, I took a page from my mother’s entertaining playbook. This called for goldfish crackers, a couple of classic movies and the old party hat activity.

This hat craft made its debut at my 7th birthday party, and still keeps little ones entertained today. It’s the perfect last minute activity, and what’s a birthday party without a hat? And, in the case of this party, friends spilling out onto front stoop, a fridge stocked with champagne bottles in pyramid formation, a homemade layered red velvet cake and a house full of people I hope to know for many decades more.

It all started with the hat. Here’s what you’ll need:

*Paper bowls (which also conveniently double as bowls for cake) 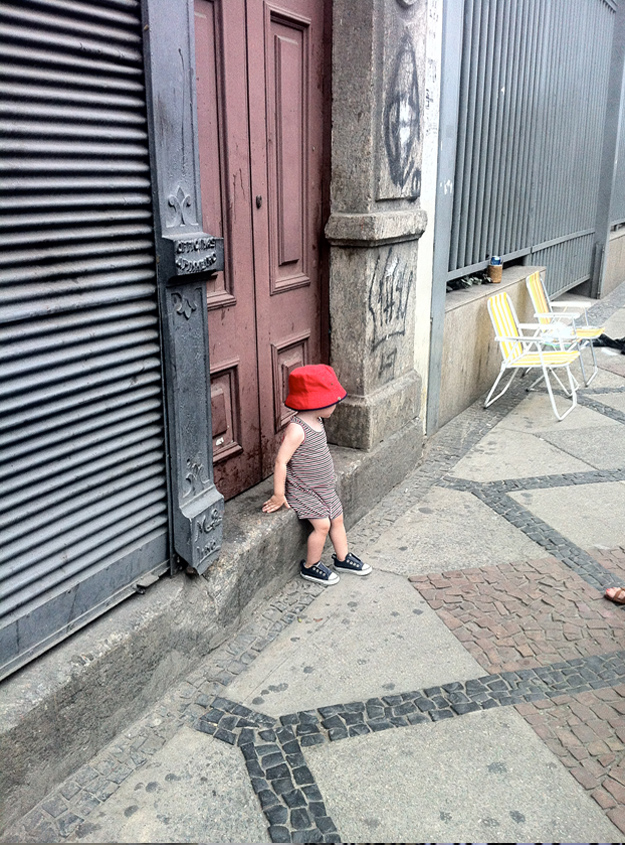 Last month we embarked on our first international family adventure to Rio de Janeiro, Brazil. Yes, the beach destination best known for barely-there swimwear, steamy Carnival festivities and dance-until-dawn-nightlife scene. Probably not top of mind for a family vacation. However, the upcoming host of both the World Cup 2014 and Olympics 2016 has been building up infrastructure, working to drop crime rates and generally ensure that the city is safer for all visitors.

I was less concerned about crime and more wrapped up in the logistics: visas, passports, making copies of our son’s birth certificate, and checking with our pediatrician about additional vaccines (none required since we weren’t venturing into the jungle). And, while the 10-hour plus flight felt imposing with a toddler (could I possibly pack enough snacks?), the time change (two hours ahead) was reasonable, making this destination seem possible for our experiment in family travel. 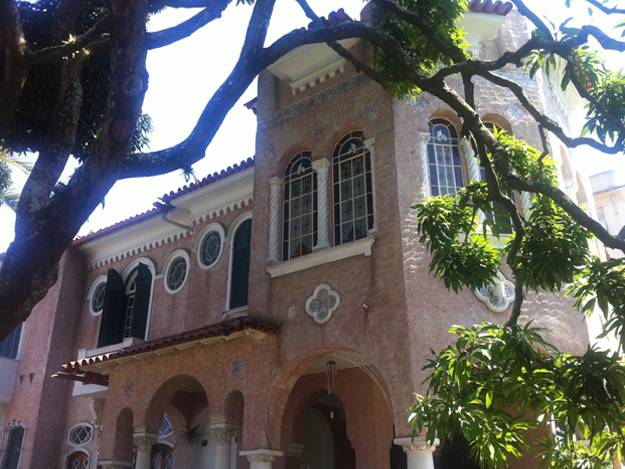 This possibility became a reality when we checked in for our TAM Airlines flight, and passed through the looking glass into the magical realm of Brazilian hospitality towards families. As the priority boarding announcement for passengers with disabilities and families was made we listened passively. These announcements seem perfunctory on domestic flights, and go largely ignored. The Brazilians however take this stuff seriously, and all but pushed us to the front of the line. The flight attendants cooed and fawned over our son. And during our trip a flight attendant was bouncing a toddler up and down the aisles as if it were just a routine part of his job. 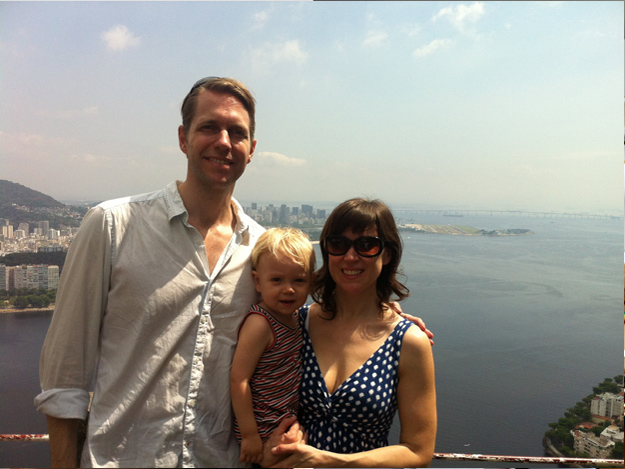 The Brazilians, it turns out, are crazy for kids. There are priority lines for families at sightseeing spots and airports. And people stopped to engage our son, everywhere––from a doorman frantically waving to get Soren’s attention to the cab driver who reached back to play with him at every single stoplight. It wasn’t just us. I spoke with a friend who was in Rio with his three children recently, and he too was absolutely blown away by the consideration his family received. 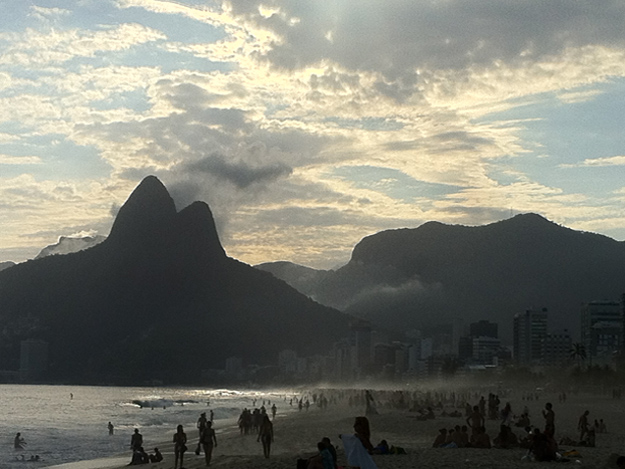 I’m not someone who expects preferential treatment just because I have a child, but it was an incredible thing to witness a society that acknowledges even its smallest citizens. It made me realize how the focus in the US is largely on the “productive members”, whereas the Brazilians seem to regard people of all ages. It makes for a huge cultural difference. 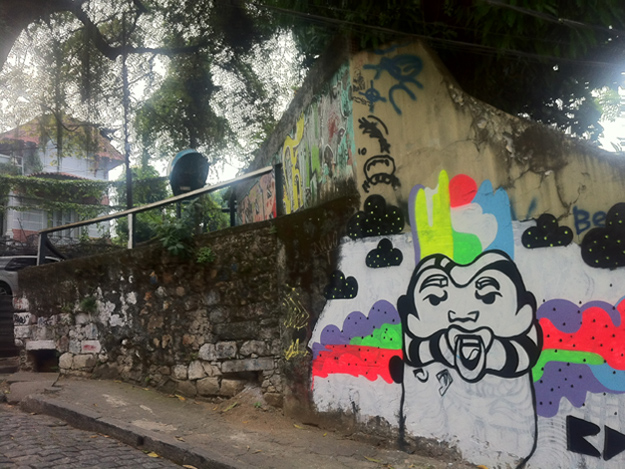 This open-arm welcome at restaurants, in stores and pretty much everywhere we went made relaxing and enjoying that much easier. Of course, as with any solid adventure, there were the low points: the camera broke on the first day so we documented with the iPhone; save for one afternoon, the beach was closed for swimming  (raw sewage in the water!); and our son can only sit for about 15 minutes at any restaurant.

But, none of this detracted from the adventure.  We did it. We navigated long flights, language barriers, mystery dining experiences and our own fears about venturing outside of our comfort zones as parents. Which, as I’m finding, is at the heart of this parenting thing, a realization I will happily blame on Rio. 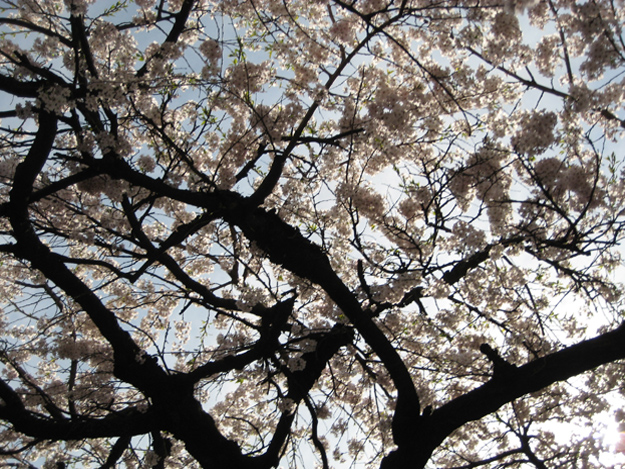 April is National Poetry Month. So read a poem, recite one or pick up a book of poetry for someone (yourself even). I’ll be making an effort to read more poetry this month, so please send along any suggestions.

If ever there were a spring day so perfect,

so uplifted by a warm intermittent breeze

that it made you want to throw

open all the windows in the house

and unlatch the door to the canary’s cage,

indeed, rip the little door from its jamb,

a day when the cool brick paths

and the garden bursting with peonies

seemed so etched in sunlight

a hammer to the glass paperweight

on the living room end table,

from their snow-covered cottage

so they could walk out,

into this larger dome of blue and white,

well, today is just that kind of day.