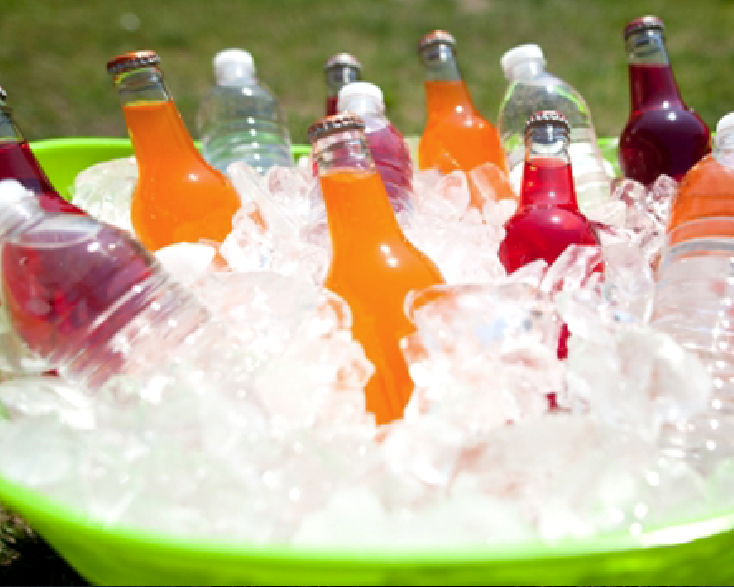 The season of the last minute barbecue, patio drinks and front stoop hang is on. So, in an effort to keep the good times rolling, remember to arrive with a little something. While most people get this idea of basic contribution and general thoughtfulness, I’m always surprised by people who show up empty handed. And then go on to knock back a six-pack leaving the hosts with zilch.

Last summer, I watched a group of legitimate adults swoop in on a party, wipe out the contents of the cooler and then make their leave. So, perhaps this concept of adding something to the party isn’t one that’s so well understood.

It was once considered in poor taste for a host to serve a bottle that guests presented as a gift. But, that would also imply that your host has a generous stash on hand, and I don’t know too many people with a deep wine cellar in their one-bedroom apartment. So, if you plan on drinking wine or beer, stop off and grab an interesting local brew, bottle of wine or cider that you’d like to share. If you really want to get fancy, come with the fixings for signature cocktails, like white sangria or negroni punch.

If a teetotaler, pick up a bottle of sparkling lemonade or fizzy water. And, if you want to go the extra step, flowers are always lovely too, especially for a dinner party. It’s just the idea of adding something to the party other than your lovely self, of course.

The last two summers our family has loaded groceries, baby gear and adult beverages onto a chugging ferry bound for a small island off the coast of Cape Cod called Cuttyhunk. The absence of bars, fancy restaurants and flashy resorts makes this the ultimate getaway for blissfully unplugging from our otherwise over-wired and hyper-connected life. I know that I should probably hold this well-kept secret tight, but I did go ahead and write about it for The New York Times and Bon Appétit. Perhaps a few more curious travelers will explore the island, but the no-frills atmosphere certainly isn’t for everyone. Which is precisely the allure for locals, long-time visitors and even those starting new summer traditions like us. 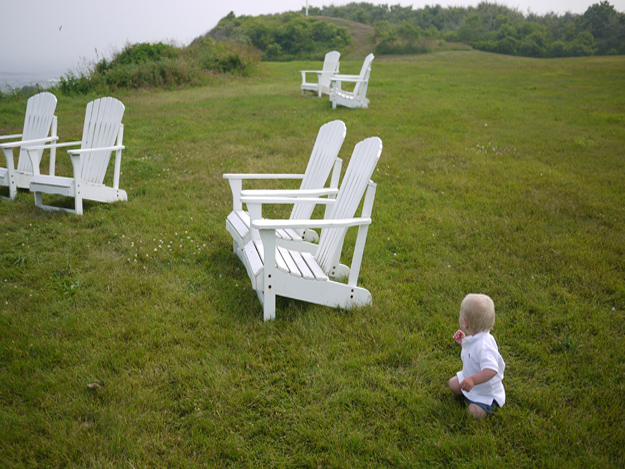 2011: Soft landings for our new walker on the lawn of the Cuttyhunk Fishing Club. 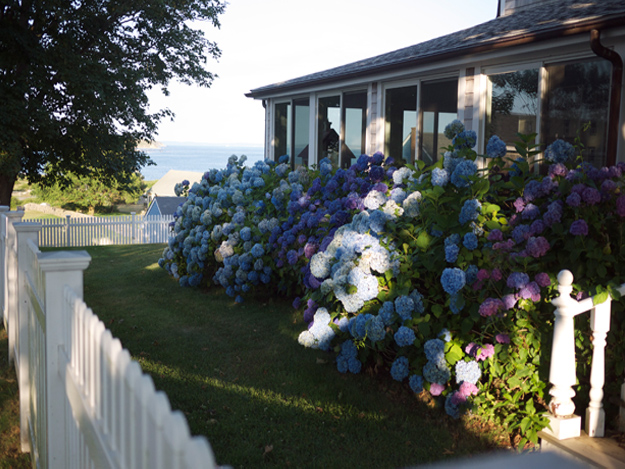 Hydrangea bloom in abundance all over the island. 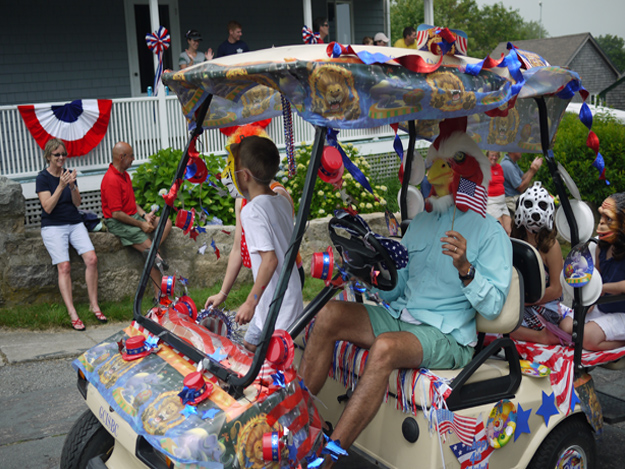 A float in the Fourth of July parade. Locals festoon their golf carts in streamers or flags––there was even one trimmed in PBR cans––for the annual procession. 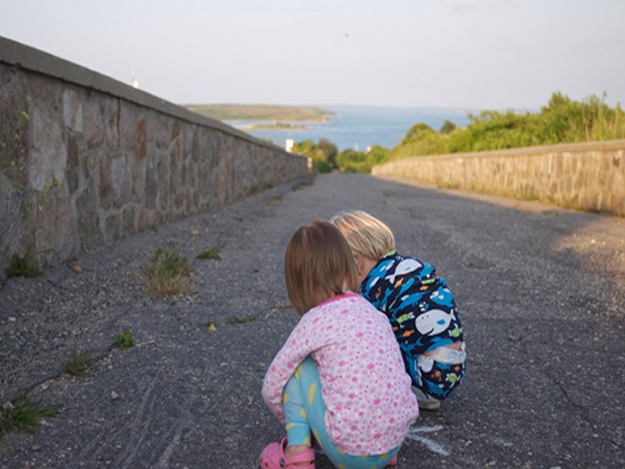 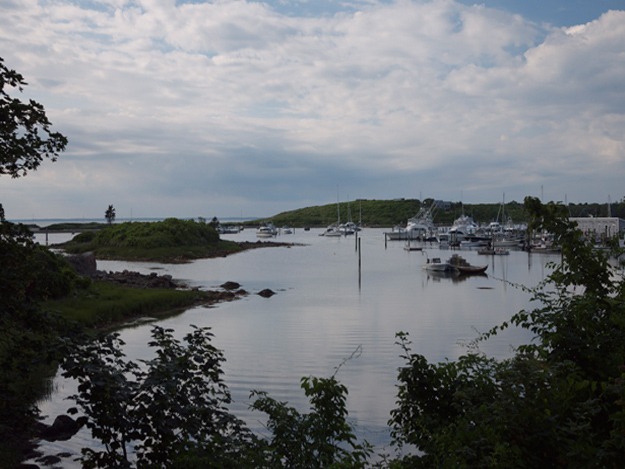 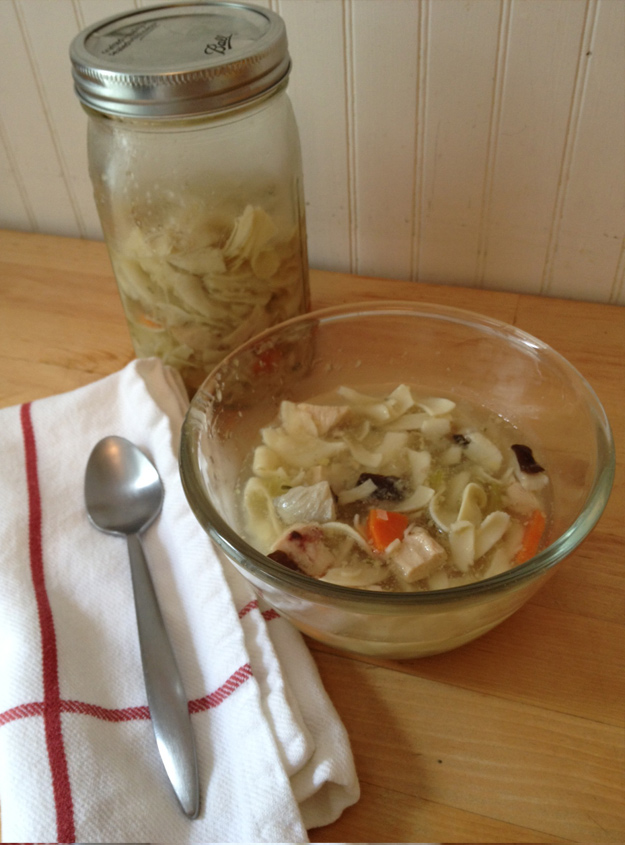 Spring has been temperamental with its steamy, humid highs and cool, rainy lows. As a result it seems like just about everyone I know has suffered from some sort of cold or cough, myself included. So a few weeks ago when my niece and I both came down with whatever this blah is, I churned out a giant cauldron of chicken noodle soup.

I packed it up in large Mason jars and froze one for later. Later being today. The blah and the rain crept back in and I needed to seek the comfort that can only be found in a bowl of chicken noodle soup.

I adapted this Old-Fashioned Chicken Noodle Soup recipe from an old issue of Bon Appétit. If you cook up a pot let me know how you customize it.

Return broth to simmer. Add onion, carrots and celery. Simmer until vegetables soften, about 8 minutes. (Can be prepared 1 day ahead. Cover chicken meat and broth separately and refrigerate. Bring broth to boil before continuing.)

*I used low-salt broth and 2 out of 4 of us said it needed more salt. I had a cold so I could not accurately judge. Perhaps next time I’ll use a few cups of full sodium broth. 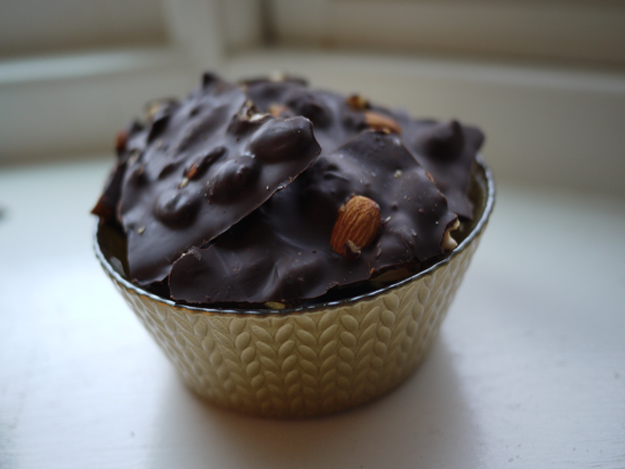 I was at a party recently where I finished nearly an entire tray of this incredible bark with sea salt, hints of caramel, almonds and dark chocolate. It launched me into complete college flashback munchie mode in the middle of a pretty fancy affair. And I wasn’t at all apologetic. It’s that good.

The recipe is from the December issue of Bon Appétit. Making the caramel takes a little patience, but otherwise it was pretty simple. I just made a batch to bring to friends, and it was nearly wiped out within two hours of our arrival. Thankfully the bowl that I gifted along with it will last a bit longer.